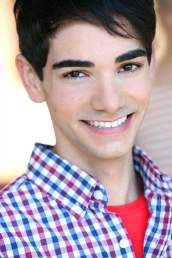 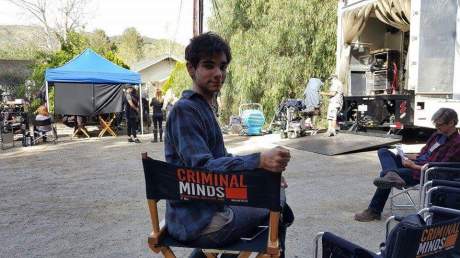 Jason Caceres who if you didn’t see in

” Criminal Minds ” better get to watching !

Hollywood has found its next big star ..

I’ve been acting since I was about eight, I believe. Maybe even earlier. I got started acting for two main reasons. The first was that my brother had this teacher, Ms. Valpuesta, for third grade. She noticed that my brother was a little reserved and wanted to help him break out of his shell. She suggested acting classes to my mother as a means to help him find his own voice. Of course my mother would never sign up just one of us for an activity so we both did it. Then we joined the Boy Scouts of America where I quickly became in charge of all of our artistic ventures. That was a self-proclaimed position, obviously, as “Head of the Arts” was NOT a position that was available in our troop. From there, I kept doing community theater and school plays until I went off to major in Theater in college. I acted a bit professionally during my time in college until I graduated and made the leap to Los Angeles.

2) Which projects have you done so far ?

I have been very lucky since moving out to Los Angeles just a few years ago and have gotten to be part of some really amazing projects. One of the first projects I ever did was a music video for Steve Grand called Back to California. It was my introduction into the professional acting world in the city, and it could not have gone better. He is one of the nicest guys in the world. After that I did a few more music videos including “Wild Heart” by The Vamps, “First World Problems” by Bart Baker, and “My Nemesis” by Five Finger Death Punch. I thought for a while that music videos would be my go-to since I seemed to be booking so many. I started gaining a bit of traction commercially when I booked a role on an AT&T campaign, which was a lot of fun. From that came parts on commercials such as “Topps: Baseball Cards,” “Bullet Liner,” “LG,” “Curacao,” “Coca-Cola,” etc. I also started to see some head-way when it came to web series. I booked a role in a web series called “Where the Bears Are” playing a teenager named Gabe. They loved me so much that I recurred in Season Three and Four. I also was very fortunate to star in a web series that has over five million subscribers called “How to Survive High School” where I play Juan. Then I started seeing small TV roles come through, such as stints on “Unusual Suspects,” “Murder Book,” “Blood Relatives,” and eventually ‘Criminal Minds.”

3) How did you get the guest gig for Criminal Minds ?

It took a lot of work to finally book a part on Criminal Minds. I had met Scott David, the casting director almost two years ago. I auditioned for that show, it must have been about five or six times, until I finally booked a part. Most people are under the impression that once you audition for something, you either get the role or you don’t. But that’s not always the case. Casting Director’s audition anywhere from 30 to 100 people for each role, and sometimes those roles are nothing more than just one line. If you don’t get the part the first time, it doesn’t mean that they didn’t like you. It just means that someone else fit the part more perfectly. If you did a good job in the audition room they will bring you back in for another role eventually.

Did you meet Shemar Moore ?

I, unfortunately did not get to meet Shear Moore. I don’t think he is in my episode because he was not at the table read either.

4) If you could do a feature movie with any two actors in Hollywood who would you choose ?

Oh, this is a hard one. There are so many actors that I look up to in Hollywood. I would have to say Angelina Jolie because she’s a beast. I’ve been in love with her since Girl, Interrupted. To be able to work alongside her and pick her brain would be a godsend. The other one I’d pick would be Johnny Depp. He’s everything I ever want to be. He is the living definition of a transformative actor. The guy’s got range like no-one else.

5) What do you do for downtime when not working ?

I don’t have much downtime between auditioning and working. I like to stay busy doing local Los Angeles theater, which is a great way to keep visible and meet people in the industry. I also run my own youtube channel where I post videos once a week, typically Mondays. Aside from that I love staying home and watching Netflix. I’m currently binging on The Vampire Diaries, my latest guilty pleasure.

6) Any advice you can give to others wanting to break into the business ?

Thank you Jason for taking time to talk with your fans !

Hola Amigo's , Willy here 42 Single Latino Dad raising my beautiful 9 yr old daughter and proud of my 18 yrs old son . I am a Movie Buff , Social Butterfly , Screenplay , Tele Novella , Online FanFic Writer and soon to be a Published Author for you kindle users ! I am GayProud and Support not only Marriage Equality , but Supporting Our Troops . View more posts